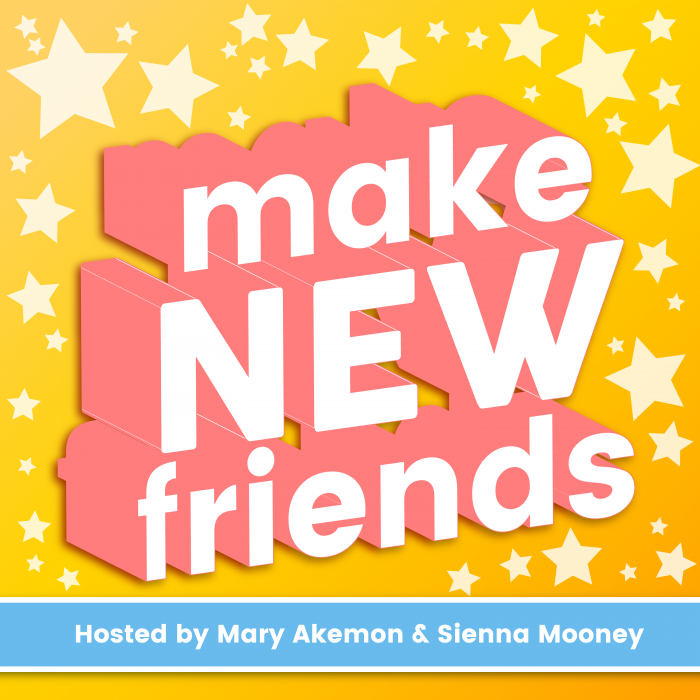 Mary and Sienna define the meaning of "friendship" and give some advice about staying in touch with friends in this special mid-season break Q&A episode!
Subscribe on iTunes Subscribe on Spotify

Q: What is the definition of friendship?

It’s important to define the term “friendship” in order to establish the parameters for research and studies on the subject. According to Sienna and Mary, friendship is defined as a bond between two people, often with kindness, trust, and loyalty.

Hinting heavily at one of the future episode topics, Mary and Sienna address whether or not they think their siblings make good friends. Obviously it tends to depend on the relationships in general, however that doesn’t always mean that you have to be thick as thieves with your siblings.

Q: What do you think the key is to maintaining strong friendships even when you don’t talk too often?

As time goes on it can be more and more difficult to keep the lines of communication open between friends, especially when distance is added into the equation. In this day and age, however, the internet has made it so much easier to stay on top of the important milestones in friends’ lives! It’s key to remember to check in from time-to-time and make sure your values are still the same, even if you haven’t kept in touch as much as you used it. It’s totally natural for people to grow apart over time, so don’t get discouraged if this ends up being the case!

Q: When you’ve grown as a person, how do you balance the loyalty to the old friends you don’t share as much in common with and the new friends whom you have found?

Loyalty can sometimes be a funny thing, especially when it comes to balancing new and old friend groups. On the one hand, you’ve had these friends for what feels like forever, and on the other hand you can already tell that you and your new friends just seem to click way better. Of course it’s normal to feel a bit guilty or feel as though you’re betraying your old friends for your new friends, but it might be helpful to take a step back and ask yourself why you feel that way. Perhaps you and your old friends have grown apart? Or maybe this new friend group understands you better! Either way, that bit of introspection will go a long way to helping you figure out the new dynamic of your friend groups.

Q: What do you do when you know you can’t invite both groups of friends to the same party?

Why can’t you? Is it because one friend group hates the other? If that’s the case, then it makes sense why you wouldn’t be able to invite both to the same party, however if party is big enough it’s entirely possible that they might not even mingle with each other. Weddings are a perfect example of this, and even though it can be a little scary to not know if the two groups will mix well, you won’t know until you try.

Q: Have you done an episode on whether the US and the UK are really friends or something else? (Frenemies? FWBs? Awkward neighbors?)

When you think of institutions or ideas and whether or not they can be friends, that’s a cool conversation to have. It’s definitely something we might do in the future, especially since Mary is really interested in history and politics. Between the US and the UK on a general civilian level, the answer is yes. Allies can be a friendship but it can also just be allies. There are a lot of similarities between the two cultures so that is another level of the conversation, but right now in our current political climate it depends on who you ask. Government officials in the UK might disregard the “special relationship” because the US government is in some hot water at the moment, but also the fact that if you think of the other relationships the UK has with other entities such as commonwealth countries, those countries have a better relationship than the US does. On a geo-political scale, the answer is yes, the UK and the US are friends, but when you get down to the nitty gritty, the answer is no.

Q: How do you get past all of the millions of excuses and worries that come into your head when a friend asks to hang out? Am I ghosting them?

It’s normal to have worries and feel insecure in a new relationship, and it can be very isolating and daunting to feel like you are the one to cause these friendships to disappear. If you’re honest with your friend, you can definitely work through it. It’ll take time, but you want to put yourself in these uncomfortable situations to prove yourself wrong and get that positive reinforcement. With that being said, maintaining a friendship is a two-way street, so if your friend isn’t making the effort to hang out with you, it might be worth talking to them and getting on the same page.