“The point at which we became, what I would say brothers, is when we lived together,” according to my best friend and former roommate, Tom Van Orden.

Friendships wax and wane through the years. Adulthood in some ways can be a great test of this. A common meme describes it as two people saying they should hang out more and never following through until one of them dies. The time can seem to get away from you.

Tom Van Orden is a man of multitudes. A self-described “computer desk spaceman” and “huge nerd” who works retail, we’ve known each other for over half our lives now. I have described him as a “blue collar man of the people” which he would agree with as long as we add huge nerd to the end. But most importantly, because this is my article and not his biography, he’s my best friend.

Tom and I met in middle school. Like many kids, our bond starts with two kids talking when they shouldn’t be talking (in our case, standing next to each other in chorus). We connected through a mutual love of video games and popular culture. Spending time at each other’s houses, our families grew quite familiar with one another popping in at seemingly random times.

“We connected through a mutual love of video games and popular culture.”

Years later in our early twenties, Tom stepped up in a big way for me. “You had a roommate that ditched you,” he described the situation. “Then you called me and very cavalierly asked me if I was looking to move out of my parents’ house which I was always in a low-key state of at that point.” The harder part was convincing him he was able to afford such a venture.

Dr. Andrea Bonior is an author of books on psychological principles and friendship. She also recently started “Baggage Check Live”, a question and answer chat series with the Washington Post about relationships and work-life balance. Dr. Bonior offered some insights over email that could apply to Tom and me.

She wrote that childhood friendships had activities that put people in the same place and how “that changes drastically once we become adults.” She also noted how coworkers can somewhat fill this role, but not entirely. “It’s also very awkward to initiate friendships as an adult because needing new friends,” she wrote, “though a very natural phase of life, often feels embarrassing and there is no script for it like there is for dating.”

“It’s also very awkward to initiate friendships as an adult because needing new friends, though a very natural phase of life, often feels embarrassing and there is no script for it like there is for dating.”

It was around the time that he moved in that Tom and his now-wife Meghan began dating. Meghan would eventually move in with us. “She started doing laundry at our apartment and then never left,” Tom described accurately.

So our weird little family grew to four. Tom, Meg, me, and at that point my now ex-girlfriend Ruth who I’ve written about previously. We formed an unusual group, but a close one all around. “From her perspective,” Tom said of Meg, “I don’t want to call you out for being a callous monster, but she says you’re one of her favorite people on this planet.” I tried to evoke something resembling an emotion about this, but failed. 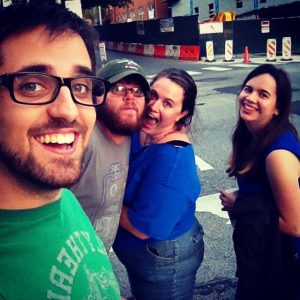 After a little over a year and half, Meg accepted a teaching position in Virginia where she and Tom then moved. “It was terrifying, I think that’s the only word I could use to describe it,” Tom said about moving away from home. “You never know what life brings on the other side of the unknown.” With Ruth having left before them, I remained the only one of the original roommates in the house.

Of course, Tom and I have remained close, but it’s different. “We don’t see each other every day,” Tom said. “We still talk basically every day.” Which is true, but worrying to me.

I tend to lose track of things that aren’t right in front of me. Old coworkers and classmates fall by the wayside often after they have left my daily life. “It’s just how I think being an adult works,” Tom said about how even close friends may not talk as often over time and distance. Though this isn’t to say being apart is always bad either.

“Some of us, who will remain nameless, are a little bit more uptight than others,” Tom said about no one in particular.” I agreed with this statement while looking intently at my color-coded calendar app.

“I tend to lose track of things that aren’t right in front of me. Old coworkers and classmates fall by the wayside often after they have left my daily life.”

Our dynamic is an unusual one that subverts traditional masculinity. Which is to say we hug a lot and open-up to one another. “The version of me that is friends with you is 98% of who I am as a real person,” Tom said. When questioned about the remaining two percent, he responded “a man has to have some secrets” but also that he would be remiss to say anyone but Meghan would really hit 100%. Which is totally fine, and I don’t feel overshadowed at all, MEGHAN.

“I truly believe that our culture is very hard on guys when it comes to friendships,” Dr. Bonior wrote. “We call it things like “male bonding” or a “bromance” — which, while in fun — shows that we feel uncomfortable taking it seriously.” She believes this leads to more isolation among men who fear appearing vulnerable. “Women are often allowed to be more social just for being social’s sake,” she wrote. “For men, there is pressure for it to be activity-based, rather than just sitting around and talking.”

This rang true for me. Even with our closeness, it is rare that Tom and I will only call and talk to one another. It’s usually through a medium like video games that we can both talk and at the same time focus on a task.

There is a comfortability to a friendship that has gone as long as ours though. A familiarity with how the other operates and an alignment of values. It’s something I cherish.

“In some ways I would almost say we are as same as two people could be that are not soulmates. Although you could argue that we are,” he said over audio chat with what I would assume was love in his eyes.

“For men, there is pressure for it to be activity-based, rather than just sitting around and talking.”

Dr. Bonior also pointed me toward some research that emphasized just how important friendships are in the long run. This included a Bringham Young University study that indicated prolonged loneliness can have a similar detrimental effect on life expectancy as cigarettes or alcoholism. An 80-year study from Harvard also found a correlation between quality relationships and sense of fulfillment.

When asked to describe our decade and a half of friendship, Tom has said we are “the very best of friends that have ever been.” This description is nothing but accurate, so suck it, other friendships (except for the person who is reading this. You, yes you. We should hang out more).

Robert Beiler is a freelance journalist based in Pennsylvania who loves technology, self-improvement, and the macabre. For more from Robert, visit his website.